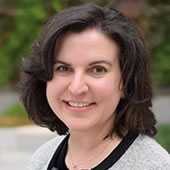 Kristen Bessette is an accomplished actuarial executive and business leader, most recently serving since March, 2018 as the Chief Actuary at QBE, North America, an integrated specialist insurer offering specialty, property / casualty, and reinsurance capabilities. Prior to that, Kristen served as Chief Actuary of Commercial Insurance at Liberty Mutual Insurance, after holding a series of progressively responsible roles there.

Over her career, Kristen has worked on growing and rehabilitating parts of businesses, using her quantitative expertise in traditional actuarial areas of evaluating risk and pricing, as well mining a wide range of data and analytics to achieve business results. Known for her leadership in mentoring and developing people, Kristen led the actuarial talent program for Liberty Mutual over a ten-year period, supporting substantial growth in demand for actuaries and changing skill requirements by designing and building a multi-campus training and development program that supported people “from hire to retire”. While she led the actuarial program, Liberty Mutual was recognized for the first time by the International Association of Black Actuaries as Employer of the Year.

Kristen is currently on the Board of Directors for the Spencer Educational Foundation, where she serves on the Audit and Grants Committees. Previously, she was appointed to a term as the P&C industry actuary to the Florida Commission on Hurricane Loss Projection Methodology, and has served on various industry committees as well as on the Board of Directors for the Casualty Actuaries of New England. She was named a Woman to Watch by Business Insurance in 2015.

Kristen is a Fellow of the Casualty Actuarial Society and a member of the American Academy of Actuaries. She holds a Bachelor of Science in Mathematics from Bates College.